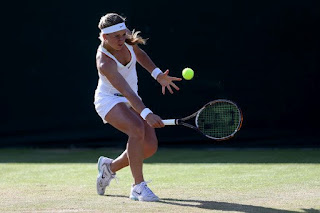 Taylor Townsend (USA)
by Helen Gilbert
Wednesday 4 July 2012
Top seed Taylor Townsend and No.2 seed Eliza Kulichkova became the biggest casualties of the Girls’ Singles on a day which saw a number of juniors playing two matches in a bid to clear the backlog of rain-delayed matches.
Wild card Antonia Lottner was the first to enjoy an incredible spell on the lawns by dispatching Russia’s Kulichkova 5-7, 6-3, 6-4. She followed the victory up with 6-4, 6-1 win over Turkey’s Ipek Soylu to book a place in the quarter finals and set up a meeting with Eugenie Bouchard, No.5 seed.
Elsewhere, Townsend appeared to struggle with both form and fitness as she took to the lawns. Her first test came in the shape of Brazilian Laura Pigossi who produced spectacular tennis to push the American to three sets.
But while the 16-year-old’s experience told – she emerged on top with a 4-6, 6-1, 6-4 victory – she appeared patchy and out of puff during her match against No.14 seed Francoise Abanda and was soon sent packing 6-4, 6-3.
Elsewhere, Croat No.8 seed Donna Vekic came through a tough 6-3, 5-7, 6-2 encounter with 12th-seeded Indy De Vroome, which even attracted the attention of 2001 Wimbledon champion Goran Ivanisevic who was courtside during the match.
Meanwhile, a Sharipova of another variety caused an upset when she ousted Katerina Siniakova. This one, who hails from Uzbekistan and is called Sabina, produced a glittering display to see off the No.6 seed 3-6, 6-1, 6-3 and set up a quarter-final clash with No.3 seed Elina Svitlona.
Postado por Laura Pigossi às 10:48